TBA
"Brand New Day" is the forty-fifth episode of Marvel's Spider-Man and part one of the two part Cellar Saga. It will air on October 20, 2019.

When a series of attacks captures the Avengers one-by-one, Spider-Man is left to figure out who is behind the kidnappings.

Peter Parker is back in his own body — finally. With Doctor Octopus's Superior Spider-Man gone, Peter’s free to be his wisecracking self once again, and also resume the duties of Spider-Man. He’s just in time too, because there’s more trouble around the corner.

After The Avengers are all captured one-by-one by a mysterious being, Spidey is left to figure out who’s behind this dastardly deed. However, with so many villains already locked up in a high-security prison known as The Cellar, his suspect list is short. 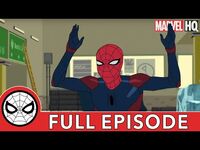